an ode to amy and frank.

a lot of things happen in the space of ten years. some people stretch into their bodies, mounds of flesh, a thickening voice, the weight of forgetting; others outgrow themselves, outgrow their memories, their breath, the way things live through them, they renew, reach out and reach in. some, however, simply give in and surrender like there is no other way but out or up or away; an unforgivable elsewhere the spirit has always been resigned to. 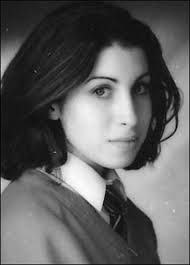 i was fourteen when frank came out, fourteen and unrecognisable, a trace of things i barely recall now but that album remains fresh on the skin and even fresher in the heart.  there were few ways i could have encountered it and it was perhaps the attempts to grow or be grown that always led me by way of fate to what has become profoundly meaningful. it was late night channel four, i most likely was attempting to watch those four women that ten years later i would never (and could never) feel like my own (shout to all those brown girls day dreaming that sex and the city life manolos and all like its aspirational); the promo advert for frank played every quarter-hour. it was that snippet ‘for in my bed’ that made me a little desperate, the nas ‘made you look’ beat, the edge she carried, the piercing i’d only previously associated with kele le roc. it was familiar and honest and hungry. i spent weeks pulling together my pocket money in order to scour hmv for this woman i’d never heard of but needed. with the album finally in hand, sitting on my lone-some lunch breaks on the edge of the school stage playing it on repeat in my sony disc-man (victorian headmistresses staring from old, stained walls), the longing never really did subside. frank was a lot of things and so was amy.

it took amy three years and a second album to break into the mainstream, three years and a new lover and a heavier addiction and something that was bigger than her body and heart and spirit and that huge voice; the kind of thing capitalism feeds off into the pockets of the rich and the stomachs of the paying lost. frank was raw and intimate in the way that only those of us who felt we knew her way back when could know. it was a disturbing imbalance between a woman coming into her own brilliance and a woman who was losing herself over and over trying to; it was the type of unvarnished feat that remained well crafted and deeply affected. it was the core.

but it wasn’t just the shifts from jazz and blues and hip-hop and subtle explosions of reggae that built an album pulled together by scattered loss, it was her way with words beyond that almighty voice she wrecked out of such a small north london body. she knew what mattered and what mattered to her was perhaps the only thing that mattered at all.

i was nineteen before i really began to know what love looked or felt like in the way she harboured open ‘you are the sweetest thing i have ever known’;  twenty-one before i really lived someone else’s leaving, where i burnt everything that was ours on his balcony “cause you were so beautiful before today”; at twenty-four it is a series of “the only time i hold your hand is to get the angle right”, “said i’ve forgotten all of young love’s joy”, and ‘what is it about men’s “my destructive side has grown a mile”. i’m on the cusp of a ‘you sent me flying’ moment and still senselessly awaiting my favourite track ‘i heard love is blind’ to feel familiar in the way it already tastes. it’s a journey that is stuck to the back of my throat, the reminder that there is only so much you can run from and when it comes there is no hiding: it’s simply a matter of when and where and what you’ll look like when it happens (perhaps then the who becomes irrelevant too). amy’s frank was less about how we lose and find things in different in moments and more about what is always some of us. at fourteen i knew little of anything but there was an ache that was etched out into my chubby, awkward, hairy, mono-browed, and undesirable brown body even back then. love can be so desperate and incomplete like that, loving yourself even more so.

in the space of those same ten years, amy left us with a legacy of an open wound. frank plays and it triumphs over back to black not because back to black reflected the moment the edge became the beginning of the end (it was long before either of these) but more so it was a woman who sung herself because she really didn’t know what else to do with all that feeling. frank was the brave opening, the volatility and vulnerability that belonged to a different time and place (think donny hathaway, billie holliday and even nas if you really get him like that). frank was an uncomfortable displacement of sorts, the melancholy always rupturing beneath the surface that sometimes makes room for inexplicable joy and an honest sadness that swallows everything else everyday. it was not a poetic romance, this was about lovers and friends and family, layered, fleeting, and fixed. it was the shades of love that come steep and hard yet always tangled and complex, brutal in the way you let go and reclaim and hold onto and keep remembering because what else you got?! back to black then was the fast and lonely of lust that sells in the way beautiful and broken things always do, it was spectacular but i’ve always been too mindful of what poor mental and emotional health looks like on women to really go out and praise fruit gone rot from the inside.

we are all ruin waiting to happen. most of us are living in this city built on stolen things: hearts, time, histories, blood, money, memory, bodies, empty, a lot of empty. amy left a space that feels ocean vast now with not much else to fill it. even then, ten years of frank is enough as worthy gets. i still listen to it the way i did back then, perhaps more deliberate in fragments but always returning to the same unhinged yearning: i have never known love to be as huge as this, but i’d like to.